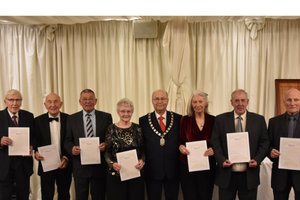 Seven former councillors of the Council, included the former Leader have received the title ‘Honorary Alderman’ for their dedication and service to the authority and its communities at a special ceremony.

Pauline Bowmer from Pleasley, Ann Syrett from Stainsby, Toni Bennett from Bolsover, Malcolm Crane from Hillstown, Brian Murray-Carr from Shirebrook, Ken Walker from Shirebrook and Jim Smith from Clowne received the honour in view of them each giving over 16 years’ service as an elected member.

Between them these long-serving ex-councillors accumulated over 120 years’ worth of service as elected members and had all played their part in helping to drive forward change at the Council, revitalising their local communities and helping to regenerate the District.

Council Leader, Councillor Steve Fritchley said, “These seven former colleagues contributed so much to the District and their local communities during their time as councillors. They dedicated so much of their lives to serving others that we felt this was a fitting tribute to their many years of service.

“Collectively they have clocked up over 120 years of service and I feel privileged to have worked alongside them. On behalf of the Council and local residents, I congratulate them all on their achievement.”

Every one of the seven councillors has also held prestigious positions in the authority ranging from Council Chair, Leader, Cabinet Member, Scrutiny Chair and represented the Council on many national organisations.

The families and friends of all the former councillors attended the special ceremony to receive a signed certificate and carriage clock.

The title of Honorary Alderman can only be given to non-serving members of the Council who have undertaken 16 plus years’ service as a local elected member.